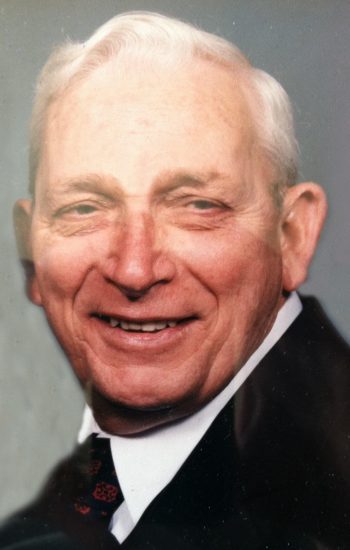 Ralph E. DeFreece Sr., age 86 of Carol Stream, formerly of Roselle; beloved husband of Anne (nee Duris); loving dad of Ralph Jr. (Mary) and David (Jody) DeFreece; loving papa of Christopher, Brittany (Kevin), Kimberly and Allison; loving brother of the late Marge (Frank) Smith, Helen (William) Tierney and Roy I. (Betty) DeFreece; loving son of the late Roy L. and Bessie DeFreece and dear uncle of many nieces and nephews.
Ralph DeFreece Sr. passed away on 5/20/2020 after a brief stay in the hospital and hospice. Ralph and Anne were married for almost 66 years (anniversary was less than two weeks away). He was a son, brother, husband, father, grandfather, a US Army Veteran, an avid fisherman, a duck and goose hunter of the finest caliber, an exceedingly skilled tool and die maker, and a talented race car driver.
In his younger years growing up in Cicero, IL with his brother Roy, Ralph enjoyed building and racing in control line model airplane races; they even went to the AMA nationals a couple of years. After serving his country in Germany for the Army as a medical aid-man, Ralph returned home to Cicero, IL. He later moved to Roselle, IL and worked for Wittek manufacturing as a Union IAM tool and die maker for 30 + years.
Ralph and family spent many years going to Hayward, WI on vacations and also spent numerous weekends each summer going to and working at Elkhart Lake, Wisconsin’s Road America road race course. This is where Ralph caught the racing passion that eventually turned into racing his own car, a Volvo P1800 that he campaigned for many years.
After retirement, the couple made Carol Stream, IL their home. They traveled the USA with their best friends, Jack and Shirley Salika, from the old neighborhood, where many trips and lasting memories were made together.

My heart goes out to you all with deepest sympathies to your family. May the memories of Ralph and the love of family surround you.

Dear Anne, Ralph and David, I am so sorry - I saw the post Marge Claussner put on facebook. You have my sympathy and prayers, Blessings, Lee