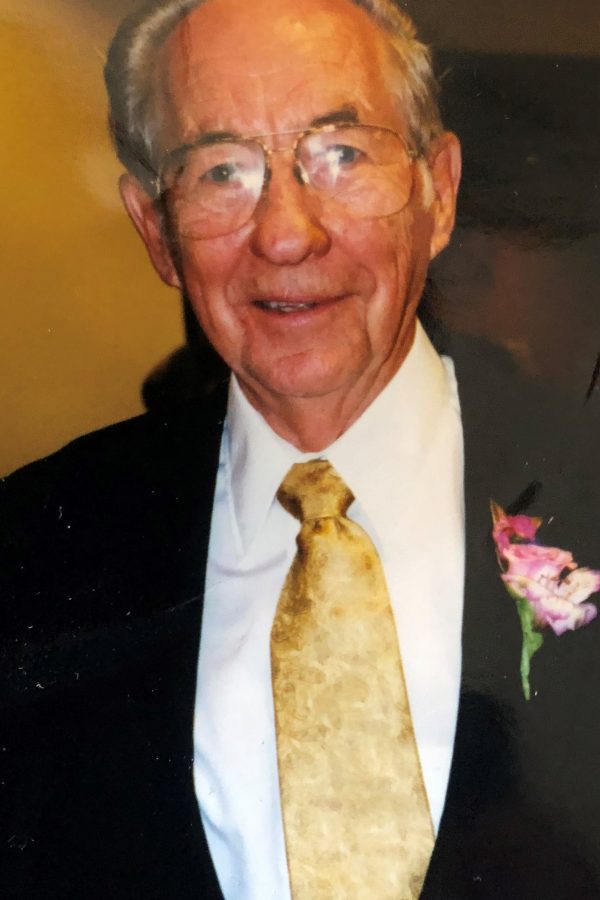 Alfred Charles Engel was born June 27, 1927 in Schaumburg, IL to Martin and Myrtle Engel. Alfred’s family later moved to Itasca for a few years, then settled in Roselle at 46 W. Elm St. Alfred spent the next 78 years of his life in Roselle. He was baptized in 1927 at Trinity Lutheran Church and later confirmed at Trinity Lutheran School in 1940.

He graduated High School at Glenbard High School (now Glenbard West H.S.) in Glen Ellyn, IL where he met Marjorie Lichthardt. After graduating high school, class of ’45, he joined the Army that October. Alfred attended boot camp at Camp Polk, Louisiana and assigned at Camp Grant in Rockford, IL for the next 14 months.

Alfred Engel and Marjorie Lichthardt were married on September 25, 1948. They purchased a lot at 112 W. Maple in Roselle and built a Cape Cod style home in 1950. Al and Marge raised four children, two boys and two girls. They moved to Lexington Square Independent Living facility in Lombard in 2016.

Al worked for CSX Railroad in Chicago for 39 years and retired at age 60. He is well known in Roselle for his volunteer work in the community. He was President of the Roselle Park District, co-founded the Roselle Historical Museum, and carried out his duties and charitable giving at Trinity Lutheran Church.

Alfred passed away the morning of May 26th, due to complications from bladder cancer, just 3 months short of his 73rd wedding anniversary.

Alfred C. Engel was survived by his wife Marjorie, his daughters Joan (Johnsen), Judy (Ibeling), and sons James and Jeffrey. He is also survived by his son-in-law Steve Johnsen and Ken Ibeling and daughter-in-law Paulina. He was blessed with nine grandchildren: Charlie, Ryan, Daniel, Kevin, Matthew, Stephanie, Alex, Martin and Bitsy (Christopher) and three great-grandchildren Lilly, Thor, and Camila.

My sympathies to Marge and the rest of the Engel family. My sister Ruth was a close friend and classmate of both Al and Marge. I had the privilege of working with All on several committees most notably the Historical Museum events. What a special guy he was. God give you the peace and comfort that only comes through Him.

Mr. Engel was such a delightful man. He and Mrs. Engel and my mom and dad (Tony and Lee Ancona) were church friends for many, many years, and Mr. Engel always had a smile and kind word to share. He was indeed a good and faithful servant. My dad used to say, "If a man dies with four true friends, then he dies a rich man." In this regard, Mr. Engel was a millionaire, for sure. Love and hugs to all the Engel family.

Our thoughts and prayers continue to be with you, Marge, and your family. We rejoice to know that Al is with his Savior in heaven; and we pray that you will all know the "peace that passes understanding" that only our Lord can provide. God bless and keep you!

Al Engel was a kind and generous man who always had a kind word and smile for everyone! We are Elm street neighbors and Al has always been the face of Roselle, and he will always be remembered. My condolences to Marge and his family❤️ Barbara Gallagher

I was sadden to hear of Al's passing. In 1945 we lived at 14 W Elm and had the honor of helping his Mom do little jobs around their house (feed the bunnies and take the dog for a walk go grocery shopping). It was when Al was in the service that he always sent me 7" storybook dolls. I cherished this to this day as they now sit in my daughter Annette's farm home china cabinet. He was the best neighbor along with the other Elm Street neighbors like the Schwolow, Grex, Walsh, Hattendorf, Andrykowski's Rapps. Jerry Botterman, Phelps, Biesterfelds Wille and George Olofson my uncle. Life in Roselle was grand. I have lived in New Lisbon Wi for 50 years but still have many wonderful memories of Al and Margie in Roselle. Al touched many hearts and will be greatly missed. Hugs to Margie and the family , I know he was truly a great husband, father and grandfather. May he rest i peace. Elm Street families were the best! Margie Olofson Jasinski, New Lisbon WI

So sorry to hear of Al's passing. He always had a smile on his face. His contributions to the Roselle Park District and the History Museum will be long remembered. Wishing Marge and her family peace and many happy memories.

I have known mr. Engel all my life. He was a great neighbor who always had a smile on his face. My husband Brad had the privlage to get to know him at the maple street cocktail meetings. He enjoyed his company as well. God bless you Mr. Engel. Now you can Rest In Peace. Brad and Vickie Marshall

We are the current residents of 46 W Elm. When we moved in, Al came to great us and tell us the host of the home. He shared pictures with us and shared his opinions during our remodeling projects. He was kind and generous and will be greatly missed.

Posted by:
Bill and Mary Owen

Mary and I were saddened to hear of your loss. Our condolences to all of the Engel family members. May he rest in peace!

Al will be missed. I am happy for his friendship and Christian example. God's blessings to Marge and family.

Uncle Al was a truly exceptional person and will be greatly missed! A very special uncle and a sponsor at my baptism. He truly embraced life with a great personality, an interesting and enjoyable sense of humor and always ready to visit. He was a great example as a son caring for his parents, a big brother and friend to my Dad, a father, grandfather, uncle and more! Great memories and a big “thank you” for all you did for me in my life!

Blessings on all the Engel family. What a blessing to know Al such a loving, caring Christian man.