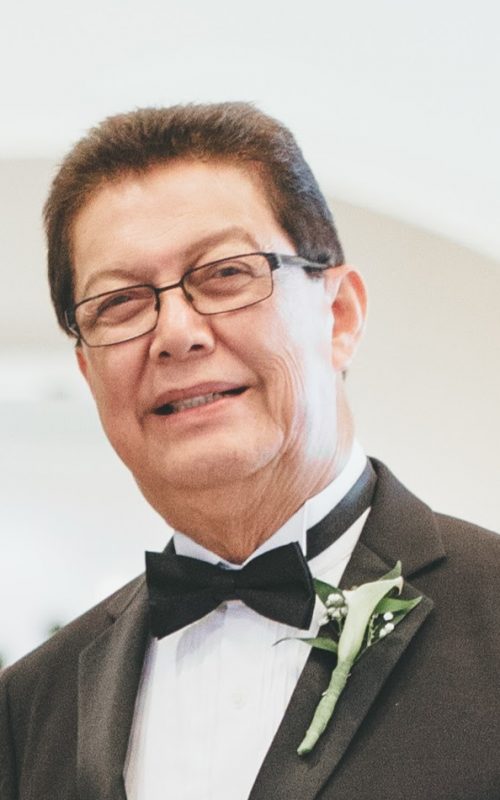 Godofredo “Freddie” Mabilangan passed away on his 77th birthday on November 16, 2020. He was the beloved husband of Wilma (née Sibulo); loving father of Rochelle (Jon), Michael, and Jeffrey (Elizabeth); adoring grandfather to Natalyse and Kaya; dear brother of Lazaro, Evelyn (Edgar), Lorna (Romeo), Renato (Loida), Lerma (Nick) and Marvin (Mareth); and uncle & friend to so many. Born in Batangas, Philippines, he was the son of the late Dalmacio & Cristeta and the second eldest of seven siblings. The family was rich in love, but Freddie had higher aspirations than being a farmer. He was determined to live the American Dream – and promised to take his family with him.
Freddie joined the band and taught mathematics to help pay for his tuition for high school and college, respectively. He graduated with a Bachelor of Science in Engineering from the National University in Metro Manila. Two years after graduation, he immigrated to the United States as one of a select group of engineers recruited by Boeing in Seattle. He eventually moved to Chicago where he met his wife, Wilma, at a friend’s birthday party. It was love at first sight and they married the following year. That same year, he started to fulfill his promise and helped his mother immigrate to the US. He subsequently helped his siblings immigrate to the US, where they went on to successful careers and raising families in Illinois and Texas. Although they were not blood related, his in-laws on both his and his wife’s side became family. He became Kuya (big brother) Freddie, then Tito (uncle) Freddie to his nieces & nephews, and eventually, Lolo (grandpa) Freddie – a welcoming presence to all. Freddie and Wilma have three children – Rochelle, Michael & Jeffrey. He made sure they had every opportunity to prosper and have fulfilling lives. Following his entrepreneurial spirit, he switched careers and started his own businesses in insurance and finance. After a rewarding career, he was happily enjoying retirement, traveling the world and spending time with his wife, family and friends. He was very active in social & service organizations, including St. Isidore’s Sacred Heart Prayer Group. Most of all, he loved spending time with his grandchildren.
One word to describe Freddie is “selfless.” His sacrifices and hard work allowed many people to live better lives. And he did so humbly. He will be greatly missed – cooking for family gatherings, sharing a funny joke or story, and providing life advice. But his legacy will live on in each one of us he touched, taught and loved.

We are touched that so many have reached out wanting to pay respects to our husband/father, Freddie. Under normal circumstances, we would have honored him with at minimum the same prayer services he has offered for so many of the faithfully departed and their families. But for the safety of all, the wake/viewing will be limited to the immediate family only. The Funeral Mass will be at St. Isidore Church on Saturday, November 28 at 10:45am and the service will be private. Those attending, masks and social distancing will be required. There will be a live stream of the service available on St. Isidore’s Vimeo page: https://vimeo.com/482768942/b1beb046f9.
We appreciate your understanding and regret that we are not able to gather in person for a wake service or post-funeral reception at this time, but look forward to celebrating his life in the future when it is safe to do so once again.

Dear Tita Wilma & Family, Our Love and Prayers are with you. We want to express our sympathy and let you know that we are always here for you. We are asking God to enfold you and your family in God's faithful love and comfort you with the cherished memories. May Tito Freddie's soul Rest in Peace. Love & Prayers, Ate Amy Rodriguez Marilin, Leo, Alyssa, Alex & Jacob Solomon

Posted by:
Odie and Melotte

Wilma: Our deepest sympathy and prayers to you and family. Freddie will deeply be missed.

On behalf of the Sacred Heart Prayer Community of St. Isidore, Bloomingdale,Illinois, i would like to express our sincere condolences to sis. Wilma and family on the passing of bro. Freddie. I would like to thank you bro. Freddie for your wholehearted dedication and support To our prayer community, especially in heading the ministry of wake services for deceased people(members or non-members). I knew that it gave you so much joy in doing this ministry, One of your many gifts was helping people in any way possible. We praise God for the gift of 77 years of life. May He reward you for your love ,services and dedication in heaven , together with all the angels and saints. You will be greatly missed, bro. Freddie. Eternal rest grant unto him o Lord and let perpetual light shine upon him. May he Rest In Peace .Amen.

We are heart broken by your passing Bro Freddie. You had been a brother, friend, adviser, choir member and a great cook to us.Thank you for the delicious recipe you shared for Batangas adobo and how to cook Mackerel. We will miss you dearly. May your soul Rest In Peace and God’s Perpetual light shine upon you. Sleep in peace now. Our prayers and condolences to Sis Wilma and family; May your faith give you solace, comfort and peace. We love you . Bro Resty/ Sis Cora

Freddie, I’m sad that you’re gone. Our loss is Heaven’s gain. You will be sorely missed. I cherished the moments that were spent with you and Wilma and I admired your insatiable desire to help others. Heaven is ready for you, my dearest friend, and may you Rest in Eternal Peace. My deepest condolences to Wilma and the family. May you find strength and pace from our dear God in this trying time.

Freddie, you are truly a great friend who we will miss dearly. Rest in eternal peace. Till we meet again. Love from Raul and Ginger