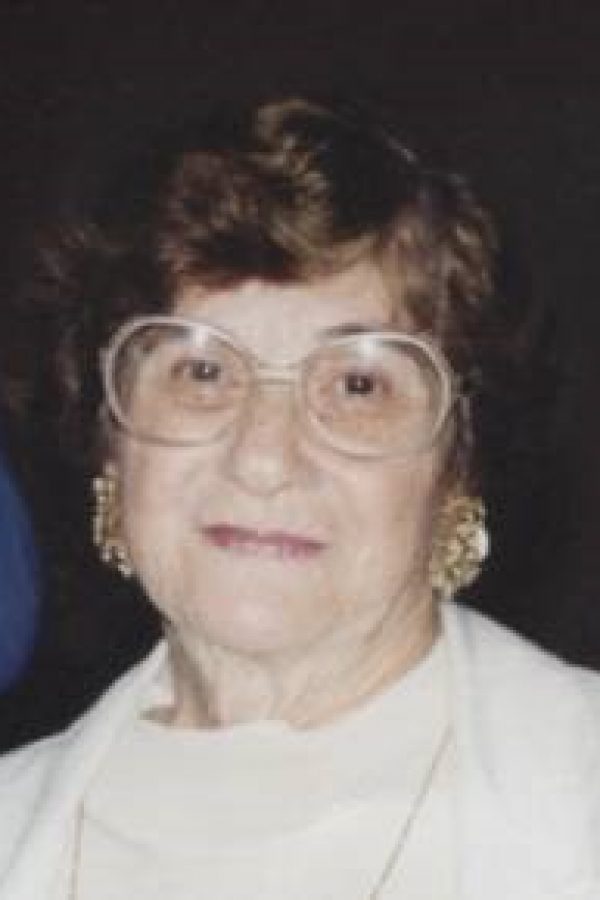 Lena Leverenz died at 97 on May 25, 2020 from complications of the Cronavirus at the Addolorata Villa in Wheeling, IL.
Lena Angelina Leverenz (nee Lolli) was born on July 12, 1922 in Cottonwood, Oklahoma to Italian immigrates. Her father, Victor Lolli, was a coal miner until he was injured in a mine explosion in 1929 and her mother, Concetta Bellettini, was a homemaker raising Lena and her five brothers and sisters. To supplement the family income, her mother distilled ‘moonshine’ and made ‘choc’ beer and sold it to the locals and out of town visitors. One of Lena’s jobs was to look out for the revenuer man when the still was in operation so if he showed up they could dump the mash in the pig-pin so they wouldn’t get caught. If this happened Lena would have to keep the pigs awake and walk them around, working off their hangover or if they laid down, they would die.
After Lena graduated from the Coalgate High School in 1939 she moved to Oklahoma City where she had a job delivering milk with a horse drawn wagon. She also supplemented her income delivering mason jars of moonshine to some of her special customers.
After her father died in 1942 Lena returned home, now in Coalgate, OK. She went to work at the U.S. Navy Ammunition plant in McAlester, OK. While ‘Rosie the riveter’ built the bombers, Lena made the bombs they carried. They also made artillery shells for the Navy war effort throughout the Pacific.
After the war Lena moved to Seattle Washington where she met her first husband who was in the Navy. She moved around the country with him and finally settled in Chicago where her sister, Josephine Lolli George, lived. She also divorced her first husband there.
Lena’s second husband, Herman Leverenz, worked for the City of Chicago, and had just opened a furniture store in Chicago and she took over managing and learning about the furniture business. Lena was a respected member of the ‘IFDA’ (International Furnishing and Design Association) and held several offices in the Illinois branch. Lena finally retired from her interior design business in 2014 at 92.
Lena was a member of St. Ansgar Catholic Church in Hanover Park, IL where she sang in the choir and was treasurer of the Ladies axillaries of the Knights of Columbus.
Lena and Herman were very passionate members of the Chicago Democratic party and supported and campaigned (successfully)for many of the Chicago and Illinois elected officials.
Lena enjoyed playing the piano ‘Honky Tonk’ style for her friends and can be seen on YouTube as the “The Amazing Lena Leverenz” at her 91st birthday bash.
Lena is survived by her stepson Lawrence Leverenz and his wife Bridget, granddaughter Margarette Border, great grandsons Antony Leverenz, and Trey Border, and nieces and nephews, Wilmina Lolli Thomas, Jeannine Lolli McFall, George Lolli, Barbra Lolli, Dennis George, Betty Lolli Anderson, Patsy Lolli Cavender, Glen Lolli, and many cousins.
She was preceded in death by her husband Herman Leverenz and grandson Mark Leverenz, brothers and sisters Enrico (Red) Lolli, Dorando (Squency) Lolli, Josephine Lolli George, Amus Lolli, Blanch Lolli, nephews and nieces Henry Nick Lolli, Lela Jo Lolli, Donald Lolli, Victor George, and Charles Lolli.
Services will be held locally, and interment will be at the Coalgate/Cottonwood cemetery in Coalgate, OK. Dates to be determined.

I only met her a few times during her visits to California, she lived an amazing life, what an important piece of Italian history.