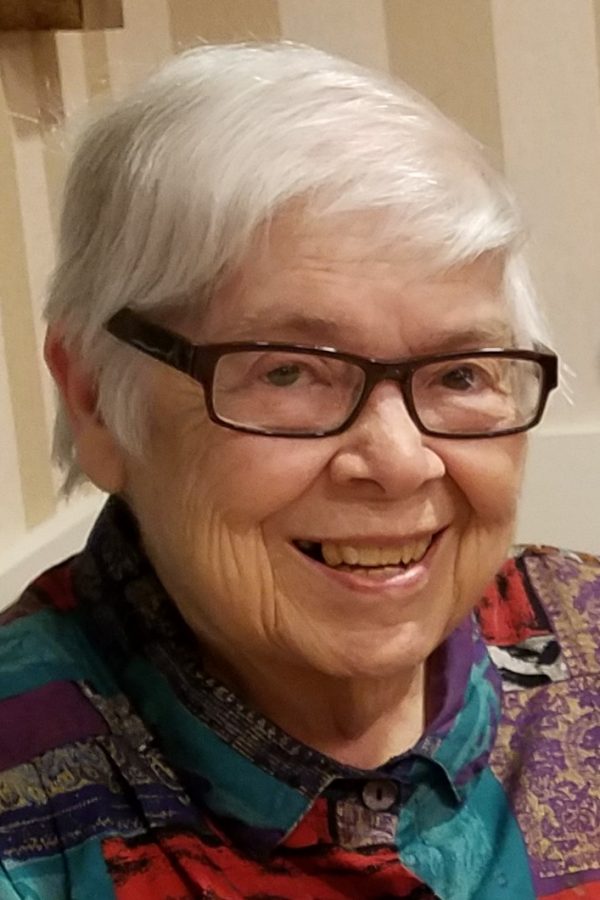 Mary Elizabeth Riley Morrow, longtime resident of New Orleans, LA, was welcomed home to Heaven by Ken, her husband of 57 years, on June 17, 2020.
Born on July 1, 1931 in Madison, WI, to William and Pearl (Williams) Riley, Mary was the loving mother to Michael (deceased), Karen (Jim) Petrus, Kevin (Marcee), Amy Sotolongo, Christopher (deceased), and Patrick; and devoted grandmother to Rachael (Tony) Socarras, Lisa Sotolongo, Bryan Petrus, and Emily Petrus, as well as five great grandchildren. She had two sisters, Janet Robertson (deceased) and Patricia Morrison.
After marrying Ken in 1951, they moved several times early in their marriage, travelling from Wisconsin to New York to Oklahoma, and finally settling in New Orleans as their forever home. She was a voracious reader, with books in piles around the house. And she was an avid needle crafter, serving as a test stitcher for many of the designers in the New Orleans area.
Once her children had all started school, Mary returned to college at UNO and earned a BS in Teacher Education. While she enjoyed teaching at all levels from kindergarten to sixth grade (sometimes including one of her own children) she found a new interest at UNO when she became active with the UNO Theater Department. This led her to earn a MFA in theater arts specializing in costume design and construction. When UNO put on plays or operettas or operas, she would be a central fixture in ensuring the costumes and the sets were done perfectly.
Mary used her theater education, her amazing needlework skills and her creative design backgrounds to become active in the New Orleans art scenes. She took on assignments with films produced throughout the state of Louisiana where she would be called upon for her expertise in costumes and sets. She worked in the music industry, supporting costume and set needs for groups that would come to New Orleans to film music videos. She helped dress professional ballerinas in town for their national tours. She always a fun story to share of her time spent with the “famous” folks she encountered along the way.
One of Mary’s proudest accomplishments was working with her friend Verna Arroyo in developing a show called “Mother Goose On The Loose” for WDSU. Verna led the children as Mother Goose, and Mary served as producer for the show as well as the creator and puppeteer behind the silly character known as “Greta Goose”.
Eventually, Mary found her niche. She went to work in textile restoration for many, many years. She would spend numerous hours working on flags, carpets, uniforms, whatever came in, in order to restore them to their original conditions. It did not matter what state it was in; she would find a way. Frequently, she would have to innovate, and devise novel methods that had not been tried before. She was always willing to pass on her knowledge and experience to others, guiding them as they expanded their own skills. The results of her efforts can be seen across the U.S. and in many countries throughout the world.
Mary added her voice to the Crescent City Sound Chorus, Sweet Adelines. The ladies of the Adelines travel all over, singing not just in New Orleans at the Jazz Tent at the New Orleans Jazz and Heritage Festival, but also to competitions around the country. The opportunity for entertaining audiences energized her, and she was always ready to step in and create costumes for their performances.
In New Orleans, Mary’s home was always open to her extended family. Her children’s friends would often spend days (and nights) playing in the yard and the neighborhood, returning for lunch and dinner (yes, we remember the bell). All were welcomed, and she quickly became a second mother to each and every one.
Mary will long be remembered for her graciousness and for her many talents, but most of all for her love of her family and her friends.
In lieu of flowers, please consider donations to the WWII Museum (where you will find several of her restorations), 945 Magazine St, New Orleans, LA 70130; or to the Crescent City Sound Chorus, 7328 Freret St, New Orleans, LA 70118.

Dear Mary Elizabeth was my friend through Sweet Adelines. She sang bass with us and when she could no longer participate in all the events she still attended meetings , listening to all the music while stitching a costume, fitting the new costumes , or creating ideas for future consideration for the group costumes. She was a talented person and interesting to converse with. My husband sat with her at one of our performances and came home amazed with all that she had done in her lifetime . Her smiling face will always be in the memories of those of us who knew her. God Bless the family Sandra Moise

Posted by:
Terry and Jeannette Strukely

Terry and I truly feel your loss. Your mom certainly was a talented woman! What a life she had! I am sure you have many fond memories. Know that you are in our thoughts and prayers. We will need to connect at some point. Take care of yourselves.

Mary Elizabeth certainly was a second mom to me growing up. I learned how to drive in her VW van. I enjoyed many times at the Morrow home. I am thankful for that. I also enjoyed singing with her in CCSC. Even when she could no longer participate, she would come to rehearsal faithfully to listen, create costumes and sew! I am thankful for that! She never complained, was super nice and always happy! Heaven gained an amazing angel. ❤️ Jeannine

Karen we were sorry to hear of your mother’s passing. She was quite a women and lead an interesting life. Your memories of her will help you through this sorrowful time. God bless you and your family.