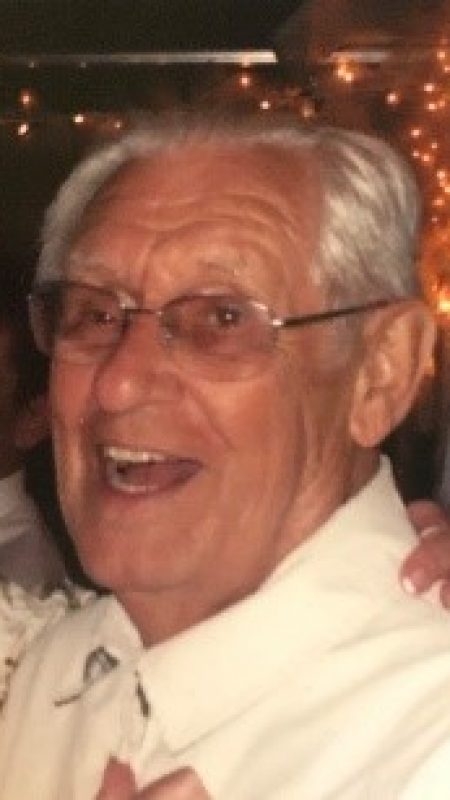 On Tuesday, April 16, 2019, Paul Ortscheid, of Bloomingdale, IL, loving husband, father of three, grandfather of four, and great-grandfather of four, passed away at the age of 92.
Paul was born on August 22, 1926 and raised in Galena, IL by Francis and Ethel (Fiedler) Ortscheid. He earned his master’s degree from the University of Colorado in 1959 and spent his career as a coral director and chair of fine arts at Lake Park High School in Roselle, IL.
He was married to Miriam (Leidinger) Ortscheid for 63 years. Together they raised a daughter, Catherine, and two sons, Mark and Matthew.
Paul was a music lover who is remembered for his genuine, kind and gentle spirit. He enjoyed working with teenagers and encouraging them to discover their talents. His choral groups made numerous recordings and were especially known for their Christmas in Song concerts.
Paul was preceded in death by his father, Francis, his mother, Ethel, his brother, Donald and sister, Doris Anne. He is survived by his, wife Miriam, his three children, Catherine Elliott, Mark (Jennifer) Ortscheid and Matthew (Deanna) Ortscheid, grandchildren, Nicholas (Susan) Elliott, Grant Ortscheid, Joshua (Jennifer) Elliott and Alison Ortscheid, and great-grandsons, Lucas Elliott, Zachary Elliott, Cameron Elliott and Ryan Elliott, and his sister Carol Smith.
A funeral mass will be held on Monday, April 22, 2019, at St. Isidore in Bloomingdale, IL at 10:45 am. A gravesite service will be held at St. Mary’s Cemetery in Galena, IL at 1:00 pm on Tuesday, April 23, 2019. Flowers or donations may be sent to Furlong Funeral Chapel, 100 Caroldon Ct., Galena, IL

LPHS Class of 1980- with gratitude to a wonderfully gifted choir director whom I will forever hold near and dear to my heart. Thank you for the memories of those trips we took and your sense of humor. I believe I took room check to a whole new level when one late night that phone in our all girls hotel room would not stop ringing and I answered it in frustration "Henry's whore house, head whore speaking!" The dead silence on the other end of the phone resulted in a rightful, response of "what, this is Mr. Ortschied, who is this?!". It was me I responded. He says go to bed. He could not look at me with a straight face at the school concert we had. He responded the next morning with sending male students to greet me and thank me for last night, lol! I will never forget my experiences and thank you for cutting through the red tape to make our concert choir trips happen at minimal costs.

My sincere sympathy to the Ortscheid family and all who loved him. He was not only a wonderful teacher, but a kind and wonderful man. Fond memories of him and Concert Choir always make me smile and I hope he knew what a positive impact he had on so many lives.

My fondest high school memories center around chorus/Concert Choir and of course Mr. Ortscheid. His passion for music and his terrific sense of humor made everyday something to look forward to. My deepest sympathy to his family and friends. Lake Park lost a legend as did we all.

My sincere condolences to the family. A favorite class he taught of mine. Chorus was such a delightful part of my high school years at Lake Park 1962-1966. He inspired music in song for me and I belong to my Lutheran Church choir today with memories of those days. My choir director also teaches at a high school. He brought out the best in all of us.

My sincere condolences to the Ortscheid family. I was in his choirs from 1964 to 1967. I cannot thank him enough for all his enthusiasm and guidance during and after high school. I've had the opportunity to experience a super avocation. Rest in peace Mr. Ortscheid.

Sending prayers and condolences! Mr. Ortcheid was a wonderful music teacher and I learned so much! Some of my best memories are from LP choirs and the atmosphere he created especially our Christmas concerts. May his memory be eternal!

So very sorry for your loss. I loved being in choir and show choir @ Lake Park. Paul was so passionate about music. He will be deeply missed. My deepest sympathy. Class of 1982.

The Johnson family expresses our sincere condolences to the Ortscheid family. Twin sons Timm and Todd and daughter Jennifer enjoyed singing in the chorus, and husband Erling and I so enjoyed listening and watching the wonderful performances by the young men and women. He was an inspiration to so many young people.

My thoughts and prayers go to Paul's family. I remember him from Lake Park for his care and concern for his students. He was able to bring out the best in them. May he rest in peace.

Loved every minute in your class rip Mr. Ortscheid class of 1976

Mr. Ortscheid was my choral director from freshman year (1962, which was his first year at LP) to senior year. He was so innovative and ahead of his time in his musical direction. We sang such incredible songs!!! From Geographic Fugue to the songs from the Messiah to Roots and Leaves! He made my high school years special, and I will never forget during senior year, when I also had a dance part in one of our concerts, when he told me that his father thought I was beautiful!! No one had ever told me that before, so it really resonated with me and made me feel special!! What an incredible man he was!! It was always a special time at Christmas when my friends and I came back to sing with the alumni group during “Christmas in Somg”. I sang every year until I moved away from Illinois!! RIP Mr. Ortscheid!!! You were one of a kind, and I am so thankful that I knew you!!!

I am so sorry to hear of Mr. Ortscheid's passing. I really enjoyed my 4 years in the Lake Park choirs and especially singing in the Christmas Concerts.

Paul was one of the first people to welcome me to Lake Park when I began teaching in 1975. We shared the Fine Arts office space at East Campus for many years. The biggest surprise and greatest joy of my retirement gathering was when Paul showed up with a single red rose for me. How perfect that my LP career began and ended with Paul. My condolences to all of Paul's family. He was a very special person.